A friend of mine gave me a copy of the new game SkyDrift for my birthday (thanks, Graham!). Before I get started, let me confess that as a pilot I hold any game that involves flying to a very high standard. Most non-simulation games do not do a very good job when it comes to flying mechanics, and unfortunately some simulation games do it poorly as well.

That brings me to SkyDrift. The idea behind the game seems to be a bit of a mash-up between the Reno Air Races and the Red Bull Air Races, with a bit of combat thrown in for good measure. You fly one of several different aircraft through a course where you are not only competing to be the first one to the finish line, but you also have to avoid a number of natural and/or man-made obstacles along the way. All the while, your opponents are using various nefarious tactics to try to blow you out of the sky, or otherwise impede your progress.

Visually, the game is quite well done. The models for the different aircraft all look quite good, and the scenery is amazing. Interactive elements, such as falling rocks, collapsing bridges, and erupting volcanoes, are very nice touches (though I do not think the falling rocks have any collisions on them since I seemed to be able to fly through them). The various courses are visually different, though some elements are common throughout, such as flying through cave-like areas.

The game-play is also quite good. Since the game is intended to be an arcade-style game, it does not have a real depth to the story. Instead, it is quite easy to pick up and play, and it doesn’t take long at all to get the hang of it. The various powerups that are scattered around the courses are fairly well balanced, and I particularly like the fact that you have to make a decision regarding whether to use the powerup immediately, or wait until you can upgrade it to a more powerful version.

There is also a very powerful risk-reward system in that the more risks you take while flying the course, the more quickly you build up your speed boost, which can be critical for winning the race. The closer you fly to the ground, or the more stunts you do while flying, the bigger your speed boost will be. However, that does require some extremely precise flying, and very fast reaction times if you want to avoid crashing.

Of course, there is the flying mechanic, which provides the primary gameplay element. I was quite pleased to find that the game recognized my joystick and did not force me to play with the keyboard. Some people can play flying games using the keyboard, but I can’t. The controls are simple and fairly intuitive. Move the joystick left to bank and turn to the left, pull the joystick back to climb, etc. What is not intuitive however, especially to a pilot, is that the horizontal axis of the joystick only turns the aircraft left and right, and the vertical axis of the joystick only makes the aircraft climb and descend.

What difference does that make? The first time I found myself in a tight turn and wanted to tighten the turn even more, I pushed the button to go to a knife-edge orientation and naturally pulled back on the joystick. Any pilot would expect this to greatly decrease the radius of the turn. Instead, I found myself climbing higher into the air while still having the wings of my aircraft perpendicular to the ground. Some experimentation (and crashes) showed that even when the aircraft is oriented 90 degrees to the ground, you still have to move the joystick left or right in order to turn. Moving the joystick forwards or backwards will only make you climb or descend. It may seem straightforward and simple to non-pilots, but most pilots will probably have a bit of a challenge coming to grips with the control scheme. I eventually got it sorted out in my mind, but it still feels strange and I will probably have to relearn it whenever I play the game again. I don’t even want to think about what kind of bad habits it may give me the next time I am in a real aircraft.

Overall, the game is a lot of fun, along the lines of games like Burnout. It is fast-paced, with equal doses of satisfaction (when you succeed in blowing up the opponent between you and first place) and frustration (when you barely misjudge that turn and crash into the cliff face). I did not spot any glaring bugs in the game, though I think a few collisions are missing (the rocks I mentioned earlier, and you also do not seem to be able to actually collide with your opponents).

There are also a few nice touches that are included. Flying low over water will cause some of it to “splash” onto the screen, flying close to ice will cause a bit of a “frosting” effect on the screen, there is a very definite speed-blur effect at high speeds, and if an opponent is firing a cannon at you, small bullet holes will “appear” in the screen. Little touches like that do a great deal to improve the sense of immersion in the game.

I would give this game a rating of 3.5 out of 5. Mainly because of the somewhat unusual control dynamics (and, as I said before, I am admittedly harsh when it comes to flying mechanics in games), and because it would have been nice to have a few more courses available. I would definitely recommend it to anyone that enjoys fast-paced, wreck-em-up racing games like Burnout, or who wants to brush up on their precision flying. 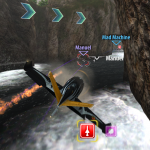 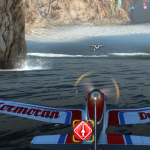 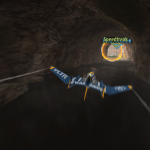 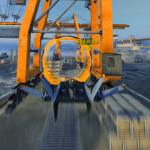 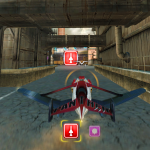